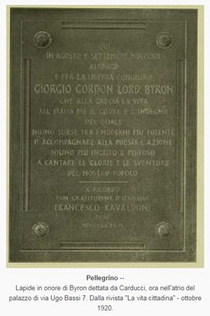 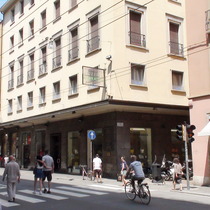 {This translates as:}
Here in August and September MDCCCXIX {1819} resided and conspired for the cause of liberty George Gordon Lord Byron who gave to Greece his life, to Italy his heart and genius. No one among the modern poets was more powerful than he in accompanying poetry with action, no one more willing and compassionate in singing the glories and misfortunes of our people.

In memory with the gratitude of an Italian. Placed by Francesco Ravaldoni.  MDCCCLXXXVI.

The photo of the plaque comes from Storia e Memoria di Bologna. The caption translates as "Memorial in honour of Byron written by Carducci, now in the atrium of the palace at 7 via Ugo Bassi. From the magazine “the city life” – October 1920."

Byron spent 1816 - 1823 in Italy in various towns and in 1819 he came to Bologna once or twice in pursuit of his married lover, Teresa Contessa Guiccioli. He stayed at a luxury, elite hotel, L’Albergo del Pellegrino which was at no 7 Via Ugo Bassi, this address. In 1886 the owner, Francesco Ravaldoni, erected a plaque commemorating Byron's visit in the entrance lobby of the hotel.

We could not have reported on these two plaques without the help of our Italian consultant, John Hartley, to whom, grateful thanks.

This section lists the subjects commemorated on the memorial on this page:
Byron in Bologna - lost

This section lists the other memorials at the same location as the memorial on this page:
Byron in Bologna - lost

{Beneath the 'bridge mark' of the Bridge House Estates and above the City of ...