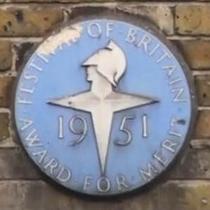 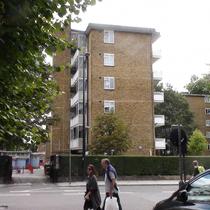 Initially we could find little information about this "Award for Merit" but, 2016, the excellent A London Inheritance came up with the goods: "... the Council of Architecture advising the organisers of the Festival of Britain recommended that there be an award for “contributions to civic or landscape design, including any buildings, groups of buildings or improvement to the urban or rural scene“. The idea of an award was approved and entries were invited. ... building work had to have been started by the end of the war with completion in time for the award judging and the Festival of Britain. The initial end date for entries of September 1950 was extended to March 1951 ...." The plaques were made by Poole Pottery, and sadly some have not worn well.

Camden's Local List says "The architects were led by Lewis Whitfield for Norman and Dawbarn. The design breaks with the older London tradition of blocks with inner courtyards, and provides open views and balconies southwards for light, with corridors on the north sides." "Yellow brick is used throughout, with metal (painted) balconies."

This section lists the subjects commemorated on the memorial on this page:
Festival of Britain - N7