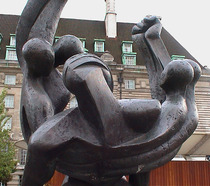 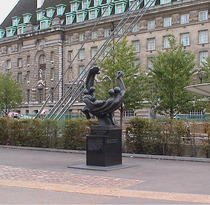 {On the front of the plinth:}
International Brigade
In honour of over 2100 men & women volunteers who left these shores to fight side by side with the Spanish people in their heroic struggle against fascism, 1936 - 1939. Many were wounded and maimed. 526 were killed. Their example inspired the world.

{On the back of the plinth:}
This memorial, unveiled by Michael Foot 5th October 1985, was made possible by the support of many democratic organisations, individuals and the Greater London Council.

{New plaque laid in the ground in 2012:}
No Pasaran / They shall not pass
The 2,500 International Brigade volunteers who left from Britain and Ireland were among 35,000 men and women from 53 countries who went to the aid of the Spanish Republic during the Spanish Civil War of 1936-1939.  They faced enormous odds.  The treacherous generals who rose up against Spain’s elected government won the war with the help of Nazi Germany and fascist Italy.  Those regimes were defeated in the Second World War that started, as the volunteers had predicted, a few months after the civil war ended.  Democracy was restored in Spain in 1977 and in 2007 the Spanish parliament awarded Spanish citizenship to all surviving International Brigade veterans.
This plaque was unveiled in 2012.
International Brigade Memorial Trust

The quote “they went….other way” is a paraphrase of two lines from C. Day Lewis’s 1938 poem, The Volunteer. “Yet, Freedom… against the wind” comes from Byron’s 1812 Childe Harold’s Pilgrimage.

These gardens were laid out in 1977 for the Queen's Silver Jubilee, and then redesigned for the Queen's Diamond Jubilee and the Olympics in 2012. This memorial was kept in roughly the place where we photographed it with new hard-standing around and a new plaque laid in the ground in front.

This section lists the subjects commemorated on the memorial on this page:
International Brigade

This section lists the subjects who helped to create/erect the memorial on this page:
International Brigade

Politician and journalist. Born Plymouth. Leader of the Labour party 1980-198...

16 bronze standards, each decorated with texts and motifs of New Zealand, suc...

Believed to be the first public sculpture in London commissioned by a Livery ...