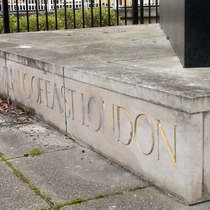 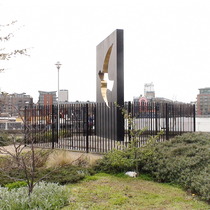 {On the low, large square plinth there are two texts repeated on opposite sides, inscribed with golden lettering:}
2nd World War 1939 - 45
Memorial to the civilians of East London

{On a nearby information panel:}
The Hermitage Memorial Riverside Garden
The garden and memorial sculpture are in memory of the East London civilians who were killed and injured in the Second World War, 1939 - 1945, and of the suffering of those who lost relatives, friends and homes.

Tens of thousands of men, women and children lost life and limb in the wartime bombing of London and other major cities.  More than a million homes were destroyed.  The most intense bombing occurred between September 1940 and May 1941 and became known as the Blitz (from the German “Blitzkrieg” meaning “lightning war”).  In the first three months of the Blitz bombs rained on London almost every night.

The Port of London, with its docks, warehouses and industry, was an important strategic target for the German bombers and an easy one to locate along the Thames.  Countless bombs also fell on the surrounding densely packed streets of East and South East London, which were home to many of London’s poorest families.  The consequences were devastating.  On this site stood the Hermitage Wharf, which was hit during a massive firebomb raid on the City of London on 29 December 1940.

The memorial sculpture was designed by Wendy Taylor CBE.  The symbol of the dove is intended to suggest hope, rather than dwell intrusively on the dead.  Its representation as an absence signifies the loved ones who were lost.  The garden and sculpture were commissioned by the Hermitage Environment Group and funded by the generous contributions of the Berkeley Group Holdings plc, the Williams Charitable Trust, the Garfield Weston Foundation and many other individuals and businesses.

The lettering on the plinth does not look contemporary with the dove sculpture. It has the look of having originally been on a older memorial (post-WW1 possibly) but we can find no information about this. The ugly railings around this sculpture were made necessary by vandalism.

Unveiled by the then Communities Secretary MP Hazel Blears and Alf Roffey who had been a fire-watcher in Wapping during the Blitz.

The image available on GoogleMaps in satellite view in 2013 was a lovely surprise. It had been captured on a sunny day and at just the right time of day - the giant shadow made this memorial unusually "visible" from above. But, 2014, the image is totally wrong and Google Timeline seems to only work for streetview, not satellite view. Shame.

This section lists the subjects commemorated on the memorial on this page:
Civilian deaths in WW2 - Blitz East London

This section lists the subjects who helped to create/erect the memorial on this page:
Civilian deaths in WW2 - Blitz East London

This section lists the other memorials at the same location as the memorial on this page:
Civilian deaths in WW2 - Blitz East London

This bronze work, "Powerhouse", was inspired by salvage from the original pow...