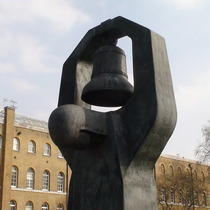 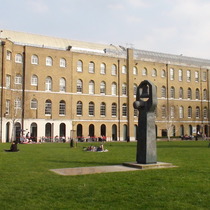 {On the red granite laid into the ground: some Russian text and:}
This memorial commemorates the 27 million Soviet citizens & service men & women who died for the Allied victory in WWII.

This memorial was raised by public subscription in Great Britain and Russia.

We shall remember them.

Designed by Shcherbakov, made by Breeze. Unveiled by the British Secretary of State for Defence, George Robertson, and the Russian Ambassador, Yuri Fokine, in the presence of the Duke of Kent.

At SCRSS we learn that regular remembrance ceremonies are held here on Holocaust Memorial Day (27 January, the anniversary of the liberation of Auschwitz by the Red Army), Victory Day (9 May, the day on which Russia celebrates the defeat of Nazism in Europe) and Remembrance Sunday.

The Holocaust tree can be seen in the background to the right of the sculpture.

This section lists the subjects commemorated on the memorial on this page:
Soviet WW2 memorial

This section lists the subjects who helped to create/erect the memorial on this page:
Soviet WW2 memorial

This section lists the other memorials at the same location as the memorial on this page:
Soviet WW2 memorial

This tree was planted in memory of those who perished in the Holocaust, 1939 ...

An armillary (or astrolabe) is a model comprising rings showing the positions...

This is made of fibreglass finished in cold cast bronze, and the scroll form ...

{Bronze plaque on the low plinth:}Ridirich by Keith McCarter {means Knight in...