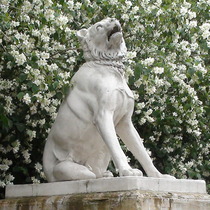 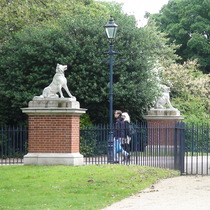 Lady Regnart donated these statues in 1912 and her husband died in 1912 so, call us wreckless, but we are assuming that the donation was in memory of her husband Horatio, even though we can find no documented evidence. Alternatively, perhaps the dogs were Horatio's much loved possession but his wife hated them and took the earliest opportunity to get rid of them.

What's odd is that the Regnarts had strong connections with St Pancras (now Camden) and none, that we can discover, with Tower Hamlets.

Some sources say that the dogs were "donated by Lady Aignarth" but we can find no evidence that this lady ever existed so believe this to be a mistake.

Visiting Rome in the 1750s Henry Constantine Jennings (1831-19) acquired a 2nd century AD Roman sculpture of a dog. He brought it back to Britain where it became well-known and a number of replicas were made, in pairs for installation at stately homes: Basildon Park and Newby Hall; another pair were sold at auction in 2005. Due to the docked tail Jennings named it after a dog in Plutarch's life of Alcibiades. In the 1770s ownership of the original passed to Rt. Hon Charles Duncombe and it stood in the entrance hall at Duncombe Park Yorkshire even after 1925 when this house was rented out as a girls' school. In 2001 the statue was acquired by the British Museum.

Trying to track the provenance of the Victoria Park dogs we went in hunt of the copies known to be made prior to 1912. The Basildon Park ones are still there, that was easy. The Newby Hall pair were more difficult. With the help of the archivist there (many thanks, Kate Bankier) we learnt that the dogs are no longer at Newby Hall, if they were ever there at all. It's possible that there has been some confusion with nearby Newby Park (now Baldersby Park). Whichever, the dogs left Newby in 1845 and settled at Wrest Park, Bedfordshire. So we failed to discover the provenance of the Victoria Park dogs.

The Victoria Park dogs were restored in 1991 but by 2009 they were in such a bad state that the council removed them and in June 2010 erected these replicas in their place. Is it possible that these replicas are the pair auctioned in 2005? The Hackney Gazette quotes a council spokesperson: "“We’ll put them {the original pair} back in the park when a new community facility is built at the other end of the park, ready for the 2012 Olympics." That may have been the plan but we can find no information about the whereabouts of the originals now (2019).

In conclusion: we don't know where the original pair came from, nor where they are now. But we had fun finding out.

This section lists the subjects commemorated on the memorial on this page:
Dogs of Alcibiades - south

This section lists the subjects who helped to create/erect the memorial on this page:
Dogs of Alcibiades - south

Wife of Sir Horatio Regnart. Lady Regnart was an active member of the Managin...

This section lists the other memorials at the same location as the memorial on this page:
Dogs of Alcibiades - south

Chosen as the featured memorial in May 2004 for two reasons. Firstly, it is v...

These sinewy figures expressively represent a mother and father in Soweto, th...