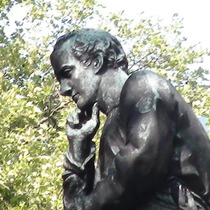 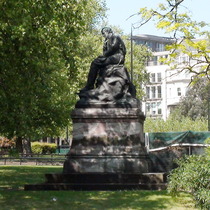 {On the front of the plinth:}
Byron

Byron is shown with his beloved Newfoundland dog, Boatswain, who had died of rabies at Newstead Abbey on 18 November 1808, and for whom Byron wrote an epitaph.

The mottled pink and white marble plinth was given by the Greek Government and installed in 1882.

This statue was cut off from Hyde Park when East Carriage Drive became the north-bound part of the horrible motorway that is Park Lane (the 1958 Hansard report is interesting). It includes the phrase "...the central reservation between the Park Lane carriageways will naturally remain open for the recreation of the public...". Sadly this is no longer the case. The tunnel that used to allow access to this statue is closed and it was only on our second visit that we summoned the courage to cross the road to take our photos.

Bob Speel covered this statue in some detail as his statue of the month in April 2012. Other information came from Waymarking.

2019: Roads have an odd post about how the spoil from the huge car park that was built under Hyde Park in 1964-5 (at the same time that Park Lane was widened) was used to construct the M4.

2022: We learnt that the Queen's childhood home was demolished as part of the 1960s Hyde Park Corner development. It was 145 Piccadilly, one of the 7 Piccadilly houses between Apsley House and Hamilton Place, all  demolished to make way for the Intercontinental Hotel and the 7-lane road connecting Park Lane to Hyde Park Corner. Their rear gardens backed onto the green space holding the Byron statue. The family moved here in 1926 shortly after Elizabeth was born at 17 Bruton Street, and moved out in 1936, to live in their new home just across Green Park, Buckingham Palace, since the father,  the Duke of York, had rather unexpectedly become the King. The Piccadilly house was badly bombed in December 1940. Hello! has a description of it and photos before and after the bombing. On this 1896 map, counting from Apsley House, no. 145 was the third house.

The 1955 film The Case of the Red Monkey briefly shows these houses as the camera tracks a car driving from the screen at Hyde Park Gate, past Apsley House, then these houses, then southwards.

This section lists the subjects commemorated on the memorial on this page:
Byron statue

This section lists the subjects who helped to create/erect the memorial on this page:
Byron statue