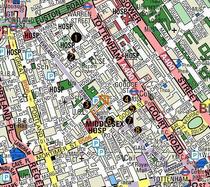 Area of London, bordered roughly by Euston Road to the north, Oxford Street to the south, Great Portland Street to the west and Gower Street to the east. Probably named after the Fitzroy Tavern public house, where the bohemian community had traditionally congregated. The name is first thought to have been recorded in print by Tom Driberg, in the William Hickey gossip column of the Daily Express in 1940.

This section lists the memorials created by the subject on this page:
London District of Fitzrovia

1717 saw the creation of the first Grand Lodge in the world, formed when four...

2011 - we could find nothing current about them on the web.

Established in the medieval period and referenced by Shakespeare in 'Henry VI...