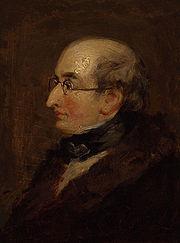 Watercolour painter. The picture is a self-portrait. Baptised in what is now ...