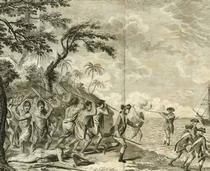 Maritime explorer and cartographer. Born near Middlesbrough. The first to map Newfoundland, explored around Australia and the Hawaiian Islands and made the first circumnavigation of New Zealand.

Killed in Kealakekua Bay by Hawaiian villagers during a fracas concerning the theft of one of Cook's small boats. Cook was held in high esteem by the chiefs so his body was given the same funeral rites that one of their elders would have received. It was disembowelled, baked and the bones cleaned. Following appeals from his comrades the remains were eventually returned for burial at sea.

This section lists the memorials where the subject on this page is commemorated:
Captain James Cook

Captain James Cook, "The ablest and most renowned navigator this or any count...