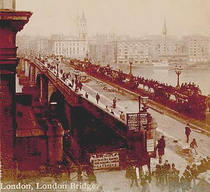 2022: Lionel Wright, who is researching the bridge and all the incorrect information that there is about it, informed us that the Havasu Chamber of Commerce notes: "Construction of a new bridge over the River Thames coincided with the dismantling of the old London Bridge. The new bridge was built directly over the old bridge. this new construction was managed in such a way so that London never lost one day of traffic while transferring from the old bridge to the new one." This was possible because only external stones and fittings were removed and sent to Arizona. All the rest of the Rennie bridge remained. Lionel gave us this link to an interview with an engineer explaining how the new bridge was built while traffic, wheeled and on foot, continued to use it.

Also referred to as the Paddington rail crash. At 8.06am, a Thames train boun...

5,635 members of the staff of the London, Brighton and South Coast Railway Co...

Director of transport systems in Ireland, Qatar and the much reviled Connex r...