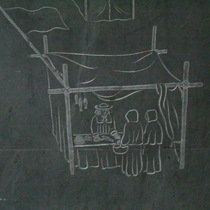 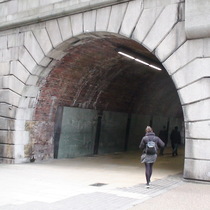 {A poem from handbills of the time serpentines across the large panels:}
Behold the Liquid Thames frozen o’re,
That lately Ships of mighty Burthen bore
The Watermen for want of Rowing Boats
Make use of Booths to get their Pence & Groats
Here you may see beef roasted on the spit
And for your money you may taste a bit
There you may print your name, tho cannot write
Cause num'd with cold: tis done with great delight
And lay it by that ages yet to come
May see what things upon the ice were done.

{4 smaller slate panels with text are inserted in the gaps between the large ones with drawings:}
After the construction of London Bridge in 1468 its narrow arches slowed the Thames sufficiently for the water to freeze over in severe winters. During the freeze of 1664 the people of London took to the ice for what became the first ever Frost Fair.

Sleds, sliding with skeetes, a bull-baiting, horse and coach races, puppet plays and interludes, cooks, tippling, and other lewd places … a Bacchanalian triumph or carnival on the water.

The final Frost Fair was held in 1814. The construction of a new London Bridge with broader spans for shipping improved the flow of the tides. The Thames no longer froze over and the Frost Fairs were no more.

Our close-up photo shows one of the scenes depicted, this one being a market stall set up on the ice to sell bread and cheese to customers in hoodies.

The south side of the pedestrian tunnel under Southwark Bridge approach is lined with 5 large slate panels inscribed with scenes from Frost Fairs on the Thames.

Ornamental Passions has the best photos of the panels that we can find. There you can see that put together they show a map (aerial view) of the south bank of the Thames from London Bridge (although oddly this is not itself shown) through to just west of what is now Blackfriars Bridge. This map is largely from Horwood's Plan (1792-9) but with north at the bottom and south at the top. On the frozen river itself are drawings of the various activities that took place at the Frost Fairs and the text of a poem, which comes from handbills printed on printing presses which were dragged onto the ice to produce novelty handbills.

We can trace this artwork back to 2008 but cannot determine when it was installed.

This section lists the subjects commemorated on the memorial on this page:
Frost Fairs

This section lists the subjects who helped to create/erect the memorial on this page:
Frost Fairs

{On a letter attached to one of the bouquets:}Dearest Marta Struck down too ...