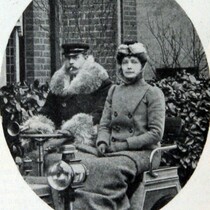 Co-pilot of the first British public airmail flight. He was a G.P. in Beckenham and had been obsessed with anything aeronautical from an early age. He was awarded a grant of £500 by the Alexandra Palace trustees to build a shed, where he created an airship which flew in 1905.

2020: A London Inheritance reports on Barton's airship flight on 29 July 1905 from Alexandra Palace to Havering, 14 miles to the west.

Died Worcestershire. The picture shows him with his wife in 1903. Grace's Guide has more information about him.

This section lists the memorials where the subject on this page is commemorated:
Dr. Francis Alexander Barton

Initially named London and Southampton Railway it connected all the way to Pl...

Alan Stanton, suitably impressed with this important plaque, informs that the...

A terminus of the London and Greenwich Railway, London's first railway. The o...