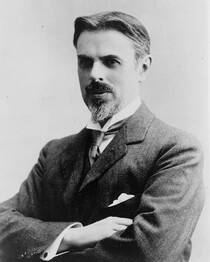 Brother to A. E. Housman. Studied art and created a number of black and white book illustrations in a style reminiscent of Burne-Jones and Aubrey Beardsley. As his eye-sight failed he turned to writing. He and his sister, Clemence, founded the Suffrage Atelier in February 1909. This was at 1 Pembroke Square and produced materials to be used in the suffrage campaign such as banners and posters. We wish there was more information but PastScape gives "A studio in the garden of No.1 Pembroke Square in Kensington, London, was used for meetings and as the workshop of the Suffrage Atelier between 1910 and 1912. Further evidence is required to determine when it was built and how long it was in use for."

This section lists the memorials where the subject on this page is commemorated:
Laurence Housman

Venetian painter.  When the supply of Grand Tourists coming to Venice and buy...

Painter. Born Birmingham, his mother dying as a result of his birth. Met his ...