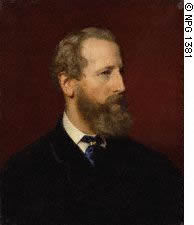 Portrait and equestrian painter. Our picture source gives a biography of his life.

In the 1841 census he is shown living with his parents in The Royal Mews, Pimlico. The 1851 census shows him as an artist portrait painter living at 55 Berners Street, Marylebone, with his widowed mother and a female domestic servant.

The census of 1881 confirms him still at 54 Queen Anne Street, Marylebone with his wife, their son William B. M. Pearce and three female domestic servants. In the 1891 census he is shown as living on his own means at 'St Heliers', Grange Road, Eastbourne, Sussex, with his wife, their two sons: Francis B. Pearce & Wilson B. M. Pearce, together with a cook and two housemaids.

This section lists the memorials where the subject on this page is commemorated:
Stephen Pearce

Born Scarborough, Yorkshire. President of the Royal Academy. In 1860 Leighton...

Portrait painter. His set of portraits of Kit-Cat Club members is on displa...