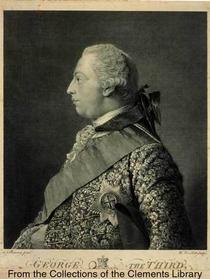 Born in St James's Square (not the public garden, one of the houses, obviously). Crowned in 1760, the first monarch since Queen Anne to be truly British. It was during his rule that many of the American colonies were lost in the American Revolutionary War. Later in life suffered from an intermittent mental illness which made him eventually too mad to rule and his eldest son ruled as Prince Regent, becoming George IV on his father's death, at Windsor. His consort was Queen Charlotte. In recent years the accepted diagnosis has been manic depression.

Journal of the American Revolution describes the toppling of a Manhattan statue of George III in 1776. This had been erected only about 10 years previously but when the States declared their independence a group of New Yorkers celebrated by pulling it down.  A 2021 meme: "After hearing a reading of the newly adopted Declaration of Independence, New Yorkers "Destroy History" by toppling a statue of King George III. And that's why no one knows who won the American Revolution.”

Invested in and was governor of the South Sea company whose trade was slavery. During the campaign to end the slave trade George supported neither side, which, given his position, was helpful to those in favour of retention.

Former slave and businessman. Born in Senegal, (his birth year is approximate...

Shooting victim. She was shot by the Metropolitan Police, on 28 September 198...