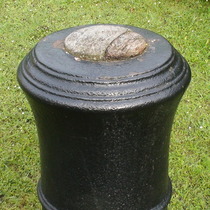 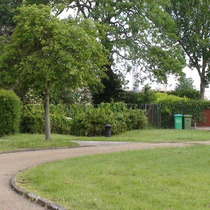 {On the white plaque almost hidden in the undergrowth behind:}
This tablet was affixed in 1926 to commemorate the 200th anniversary of the birth of Major General William Roy, FRS, born 4th May 1726 – died 1st July 1790.  He conceived the idea of carrying out the triangulation of this country and of constructing a complete and accurate map and thereby laid the foundation of the Ordnance Survey.

This gun marks the S.E. terminal of the base which was measured in 1784, under the supervision of General Roy, as part of the operations for determining the relative positions of the Greenwich and Paris observatories - this measurement was rendered possible by the munificence of H. M. King George III, who inspected the work on 21st August 1784 - the base was measured again in 1791 by Captain Mudge as the commencement of the principal triangulation of Great Britain.

The cannon was installed in 1791 by Mudge. The plaque came later in 1926. From British Listed Buildings: "Roy originally marked his line by wooden posts, but in 1791 two guns were selected at Woolwich 'from amongst those which had been condemned as unfit for the public service'. The cannon is some nine feet long, the lower six feet of which are buried in the ground."

The Hampton Poor House was, in 1863, just to the north west of the cannon, in what was known as Cannon Field, once this cannon was planted.

This section lists the subjects commemorated on the memorial on this page:
General Roy's cannon - south

{Etched in the glass doors:}Henriette Raphael gave her name to the first purp...