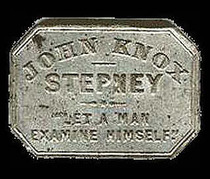 The church was built on the site of what is now Clichy House. The street at that time was Green Street but the address of the church seems to have been Oxford Street, the name the street took just one block west. The whole street now is Stepney Way. Redevelopment after the war led to the destroyed church being rebuilt in 1955, 55 yards to the west, presumably as John Knox Presbyterian Church.  Then in 1972 as part of the amalgamation of the Congregationalists and the Presbyterians to form the United Reformed Church, John Knox merged with, and took on the name of, Stepney Meeting House.

We could not find a picture of the church but here's a communion token instead.

This section lists the memorials where the subject on this page is commemorated:
John Knox Presbyterian Church

Founded and then served for 46 years as Honorary Secretary and Chaplain of th...

Archbishop and saint. Born Ireland, admitted to the Irish College in Rome and...

The church was in existence from at least the early 12th century. At the refo...