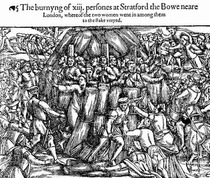 The church website has done a very thorough job on the history not just of the memorial but the church and the area so we quote them here on the background to the martyrs: "In 1553 Queen Mary Tudor came to the throne of England. She was a devout Roman Catholic and longed to bring her people back to the church of Rome. This made her unpopular with English noblemen who had acquired wealth and lands when Henry VIII confiscated the Catholic monasteries, and also with Parliament. In 1554 an unsuccessful Protestant insurrection broke out under the leadership of Sir Thomas Wyat. Wyat was defeated and executed. Mary married the Catholic King Philip II of Spain, she restored the Catholic creed, and revived the laws against heresy. For three years rebel bodies dangled from gibbets, and heretics were relentlessly executed, some 300 being burned at the stake. The queen, now known as Bloody Mary, was hated. She died in 1558, in London, and with her died the persecutions."

Garry at St John's also kindly gave us permission to use two of their pictures, this one and Bolton.

This section lists the memorials where the subject on this page is commemorated:
Stratford Martyrs