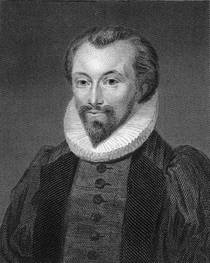 Poet and clergyman. Born in Bread Street into a literate Catholic family (connected to Sir Thomas More) at a time when the Catholic religion was banned. Appointed private secretary to Sir Thomas Egerton. 1601 married his employer's niece against her family's wishes which lead to a spell in prison and a delayed dowry. Became an MP in 1601. 1610-15 he publicly renounced his faith, converted to Anglicanism and was appointed Royal Chaplain. 1617, after giving birth to their 12th child his wife, Anne More, died. 1621 became dean of St. Paul’s Cathedral and died at the deanery, possibly in Dean's Court, but not the building that is there now since that was erected in 1670.

"No man is an island.”
“Never send to know for whom the bell tolls, it tolls for thee.”

His love/erotic poetry is much admired:
"For love, all love of other sights controls, And makes one little room an every where."
"I am two fools, I know, for loving, and for saying so in whining poetry."

This section lists the memorials where the subject on this page is commemorated:
John Donne

Dedicated to promoting the work and life of Rabindranath Tagore.