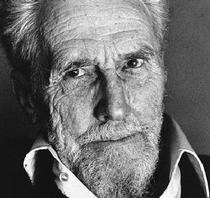 Poet. Born Idaho, USA. Had a close relationship with Hilda Doolittle whom he met at university. She followed him to London and with others they developed the Imagism poetry movement.

Pound was In London most of 1908 - 1920. Initially in lodgings at 48 Langham Street close to the BM where he spent his mornings in the Reading Room. Lectured at the Regent Street Polytechnic. 1909 moved into new rooms at Church Walk where he lived until he married Dorothy Shakespear in 1914. They moved to Paris in 1921.

An American citizen and a great admirer of Mussolini, in WW2 he made broadcasts from Rome which were openly treasonous. At the end of the war he was arrested and only avoided the death penalty by his plea of insanity. Held in a hospital for 12 years. Died in Venice.

This section lists the memorials where the subject on this page is commemorated:
Ezra Pound

Poet in the Pre-Raphaelite style.  Sister to Dante; family details are given ...

Poet. Born in High Street, Glasgow. Initially, he studied law before being dr...