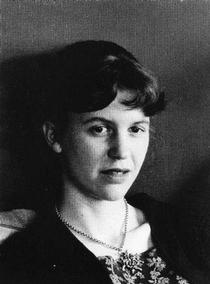 Poet, novelist and short story writer. Born Massachusetts. Came to England and met Ted Hughes at a celebration for a poetry magazine in Cambridge. Married him on 16 June 1956 at St George the Martyr, Holborn. In 1957 they moved to the USA and then back to the UK in 1959, when they lived at 3 Chalcot Square. In August 1961 they moved to Devon and in September they separated. In December 1962 Plath moved back to London with their two children, to a flat at 23 Fitzroy Road. Found dead on 10 February 1963, having committed suicide by sealing the kitchen and putting her head in the gas oven. She was under a doctor's care for depression, she knew of Hughes's affair with her close friend and had made previous suicide attempts. Novel: The Bell Jar.
Played by Gwyneth Paltrow in the 2003 film 'Sylvia' in which the location for their house was the Lloyd Baker Street area of Islington.

This section lists the memorials where the subject on this page is commemorated:
Sylvia Plath

Novelist and playwright.  The ODNB says he was born Dublin 1901.  Wikipedia s...