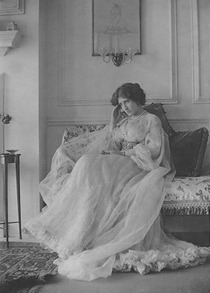 Literary hostess and patron of the arts. Died in a clinic at Tunbridge Wells.

Her Wikipedia page gives much information about her life and confirms that she was born on 6 June 1873 as Ottoline Violet Cavendish-Bentinck, the youngest of the four children of Lieutenant-General Arthur Cavendish-Bentinck (1819-1877) and his second wife Augusta Mary Elizabeth Cavendish-Bentinck née Browne, 1st Baroness Bolsover (1834-1893). On 23 July 1897 she was baptised at St Thomas's Church, Portman Square, Marylebone, where the baptismal register showed her father as a Major-General and that the family were residing at 5 Portman Square.

In 1913 her husband bought Garsington Manor, 28 Southend, Garsington, Oxford, OX44 9DH, where they lived until 1928 when electoral registers from that year show her and her husband listed at 10 Gower Street, Holborn. Soon afterwards she developed cancer of the jaw, which meant a long stay in hospital and an operation to have her lower teeth extracted and part of her jawbone removed. She told her friends that the "pain was indescribable" but far worse than the pain was the indignity to live with a seriously disfigured chin. She did her best to disguise this with swathing veils and scarves, tying them with typical Ottoline flamboyance.

She suffered a stroke in 1937 and received treatment at Sherwood Park, a clinic in Tunbridge Wells, Kent, run by Dr Alexander John Douglas Cameron (1887-1938), who on 21 October 1924 had been sentenced to nine months imprisonment for the unlawful killing of John Rowlatt Corner (1897-1924), a farmer of Kelmarsh, Northamptonshire, on 9 June 1924 at the Northampton General Hospital. He treated her with Prontosil, an untested new drug. She got worse and Cameron committed suicide on 19 April 1938. Two days later on 21 April 1938, she died, aged 64 years, of heart failure and was buried at St Winifred's Churchyard, Church Lane, Holbeck Woodhouse, Worksop, S80 3NQ. Probate was granted on 20 July 1938 to her widower husband and her effects totalled £1,832-17s-8d.

This section lists the memorials where the subject on this page is commemorated:
Lady Ottoline Morrell

Born Mendham, Suffolk. Artist specializing in paintings of horses and an op...