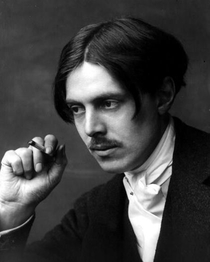 Artist and writer. Born Percy Wyndham Lewis but he didn't like the Percy and dropped it. He was born in his wealthy American father's yacht off Amherst, Nova Scotia, to a British mother who left her husband in about 1893 giving up the trappings of wealth. Lewis travelled in Europe and studied in Paris but settled in London in 1909.

Involved with the Camden Town Group and the Omega Workshops. Co-founder of the Vorticist art movement and editor of their literary magazine BLAST. He decorated the interiors of Ford Madox Ford's London house and a restaurant in Percy Street.

1916 enlisted as a gunner and was then appointed an official war artist. After the war he devoted more time to literature, writing some novels. He became friends with the Sitwells and seems to have been unique in developing a bit of a pash on Edith, whose portrait he painted.

In 1930 he married the daughter of a German woman and published a pro-Hitler book. He and his wife spent the war in America and Canada. On his return he became The Listener's art critic which he remained until 1951 when blindness forced him to leave. Died in the Westminster Hospital.

This section lists the memorials where the subject on this page is commemorated:
Wyndham Lewis

Artist. Born Peter Thomas Blake in Dartford. During the 1950s he became one o...