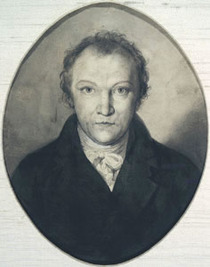 Poet and artist. Except for 3 years spent on the coast near Bognor, Blake lived his whole life in London, making his living as an engraver. Born at 28 Broad Street, now Broadwick Street (the memorial being in Marshall Street). Wrote Jerusalem in his rooms in South Molton Street, the only one of his 5 London homes to survive, the other 3 being: 28 Poland Street, (no plaque), Leicester Square (briefly, no plaque) and 3 Fountain Court at the Strand where he lived his last 7 years and died a poor man. His friend George Richmond closed Blake's eyes "to keep the vision in". Buried in Bunhill Fields Dissenters' Burial Ground. This was damaged during WW2 and restored in 1960 by which time the precise location of Blake's remains had been forgotten, or at least lost in the archives.

The poetry is from "Auguries of Innocence" by William Blake.For other armill...

Painter. Born Belfast. One of the "Glasgow Boys" he went on to become a suc...