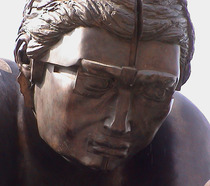 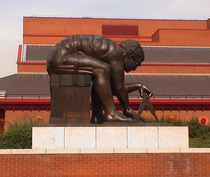 {Under Newton's left foot:}
Eduardo Paolozzi, 1995
{On the back are two pieces of text:}
Alma Boyes
Morris Singer, founders
{Below the statue, at the front:}
‘Newton' after William Blake by Eduardo Paolozzi, 1995.
Grant aided by The Foundation for Sport and the Arts. Funded by subscriptions from the football pools Vernons, Littlewoods, Zetters.

Bronze, 12 foot high (and he's sitting down). Via Facebook Henri Hudson has provided two references: one the full title of the 1790s William Blake watercolour that inspired this statue, 'Newton: Personification of Man Limited by Reason', the other a quote referring to this statue from the book 'Kraken' by China Miéville, "The imagined scientist hunched, examining the earth, his compass measuring distance. A tremendous misunderstanding, it seemed, Blake’s glowering ecstatic grumble at myopia mistranslated by Paolozzi as splendid and autarch."  Thanks, Henri, for enriching this entry. A post on Ornamental Passions makes a similar criticism, admiring the sculpture but questioning its siting. Certainly "limited by reason" are not words appropriate to a library.

2020: On the unveiling of the Mary Wollstonecraft memorial displaying a naked woman, historian Dr Hannah Greig, was moved to investigate whether any of the hundreds of statues of famous men are shown "without their pants on".  Someone suggested this statue. True, the figure is wearing no clothes but his private body is not on display; the nakedness emphasises his muscles and the efforts being exerted by his activity.

This section lists the subjects commemorated on the memorial on this page:
British Library - Newton

This section lists the subjects who helped to create/erect the memorial on this page:
British Library - Newton

This section lists the other memorials at the same location as the memorial on this page:
British Library - Newton

The tree itself is almost entirely lost, half buried in a modern planting sch...