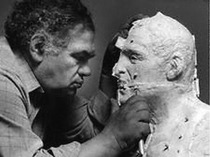 Sculptor and printmaker. Born in Edinburgh of Italian parents. His father (and we think his maternal grandfather) died on the Arandora Star. A major figure in the development of the pop-art style. See his work also in the Tottenham Court Road underground murals (2015: many removed and sent to Edinburgh - being rebuilt) and a statue in High Holborn (also removed). In 1956 he appeared (starred) in short film, "Together", one of the Free Cinema experimental films.

This section lists the memorials created by the subject on this page:
Eduardo Paolozzi

Sculptor, born near Manchester.  Other work in London includes: replacements ...