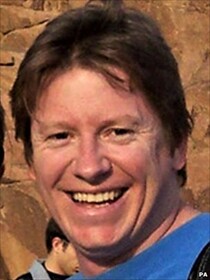 On the Hyde Park memorial Jamie’s name is given as ‘Jamie Glenbucket-Gordon’.

Our colleague, Andrew Behan, has researched this man and found that Jamie Hector Gregor Glenbucket Gordon was born on 19 December 1974 in Dulwich, whose birth was registered in the 4th quarter of 1974 in the Lambeth registration district. He was a son of David Gordon and Pairose Gordon née Bond.

Our picture source and the Find a Grave website both give a biography of his life. Another image of him can also be found on this website.

He was killed, aged 30 years, on 7 July 2005 whilst travelling on the top deck of a Route 30 bus that was targeted by a suicide bomber at Tavistock Square. The narrative verdict of his death can be found on the Inquest Form.

This section lists the memorials where the subject on this page is commemorated:
Jamie Gordon