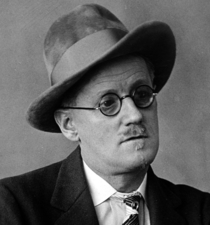 Writer. Born James Augustine Aloysius Joyce in Dublin. Considered to be one of the most influential authors of the 20th century, his works include 'The Dubliners', 'A Portrait of the Artist as a Young Man' and 'Finnegans Wake'. He is however best known for 'Ulysses' which is set in Dublin, and parallels the events of Homer's 'The Odyssey'. Such is its fame, that in Dublin, and many other places, the 16th June is celebrated as 'Bloomsday' after Leopold Bloom, the novel's hero. Joyce emigrated to continental Europe in 1901, living in various places until his death in Zürich.

This section lists the memorials where the subject on this page is commemorated:
James Joyce

Literary critic. Born Peckham. Husband of Katherine Mansfield and on her ...