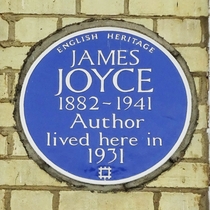 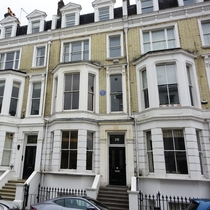 From English Heritage: "He lived in a flat at 28B {almost certainly the basement} Campden Grove from early May until early September 1931, during which time he was occupied with Finnegans Wake (1939). By Joyce’s standards, the sojourn was a remarkably settled one. He intended to make London his permanent home, and on 4 July married Nora Barnacle – long his wife in all but name – at Kensington Registry Office. However, hounded by the press, Joyce’s view of London soured. He deemed his street, which he termed ‘Campden Grave’, to be inhabited by mummies. The flat was let, and the writer was never to set foot in England again."

Wikipedia explains: "In 1930, Joyce began thinking of establishing a residence in London once more, primarily to assure that Giorgio {his first child with Nora}, who had just married Helen Fleischmann, would have his inheritance secured under British Law. Joyce moved to London, obtained a long-term lease on a flat, registered on the electoral role, and became liable for jury service. After living together for twenty-seven years, Joyce and Nora got married at the Registry Office in Kensington on 4 July 1931. Joyce stayed in London for at least six months to establish his residency, but abandoned his flat and returned to Paris later in the year when Lucia {their daughter} showed signs of mental illness. He planned to return, but never did and later became disaffected with England."

This section lists the subjects commemorated on the memorial on this page:
James Joyce

Writer. Born James Augustine Aloysius Joyce in Dublin. Considered to be one o...

This section lists the subjects who helped to create/erect the memorial on this page:
James Joyce

Barking AbbeyWas founded by St Erkenwald in the year 666. Destroyed by the Da...