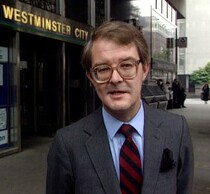 David Weeks is a former Conservative Leader of Westminster City Council and served on the council from 1974 to 1998.

He was Leader of the Council at the time it was ordered to buy back three Westminster Cemeteries after they were sold for 5p each without proper provision for maintenance.

He was the deputy leader to Dame Shirley Porter at the time of the "Homes for votes scandal" and was found jointly liable along with Porter and others to the tune of £36 million by the District Auditor, but this was reduced on appeal by the High Court. She settled by paying only just over £12million whilst he ended up paying £44,000.

This section lists the memorials created by the subject on this page:
David Weeks

Still, this pump has no handle.

Born in Essex House.  He was the son of Queen Elizabeth's Essex, and the last...