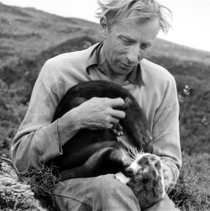 Author and Naturalist. Born at House of Elrig, Mochrum, Wigtownshire. During World War II he served as an instructor with the Special Operations Executive. In 1956 he toured the reed marshes of Southern Iraq and brought back an otter which he reared in Scotland. This was his inspiration for the book 'Ring of Bright Water', which sold over a million copies and was eventually filmed. Died in the Royal Northern Infirmary, Inverness.

This section lists the memorials where the subject on this page is commemorated:
Gavin Maxwell

Rough, the little dog of A. Bishop and family.