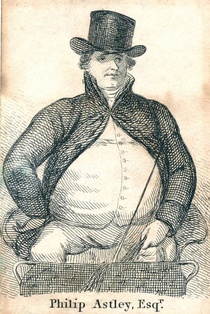 Equestrian performer and circus proprietor. Born Newcastle under Lyme. Aged 17 he joined the 15th Light Dragoons where he developed an exceptional ability breaking and riding horses. Discharged as a sergeant-major in 1766 he found work at a riding school in Islington. In 1767, as the 'English Hussar', he opened his own riding school in an open field near Glover's Halfpenny Hatch and there presented his first open-air performance on Easter Monday 4th April 1768. His innovation was to ride in a circle, providing continuous entertainment to a fixed audience. Previous such performers had ridden in a straight line which was much less satisfactory, both to the audience and to anyone trying to sell tickets.

Chris Barltrop of the Centre for Circus Culture has researched the old maps and he says the location of this field was about the middle section of Roupell Street. Astley's wife Patty took an active role: often performing riding tricks herself, as well as collecting the entrance fees and performing drum-rolls.

Success meant they could employ other acrobats, musicians and clowns. In 1769 they bought a timber yard and that became Astley's Amphitheatre. His shows were a challenge to the licenced theatre monopoly for which his was arrested but his case contributed to changes in the system. Astley toured his circus around Britain and France. His son, John, starred as a horseback dancer. Astley published 'Astley's System of Equestrian Education' Died in Paris where he is buried.

It would be a fair assumption that Astley had given up his horseback acrobatics by the time he posed for this picture.

This section lists the memorials where the subject on this page is commemorated:
Philip Astley

Founded in Bristol by Frances Power Cobbe, who had earlier founded the NAVS. ...

Royal Society for the Prevention of Cruelty to Animals

The following text came from The RSPCA site: "In 1822, Richard Martin MP pilo...