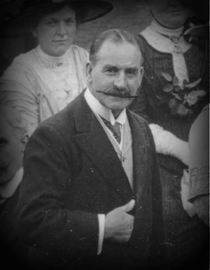 Builder. Born in Clerkenwell, the son of a carpenter, Isaac, from Cumberland. His first major development was the streets around Sotheby Road in Highbury and he went on to develop areas of Crouch End, Golders Green, Winchmore Hill and Muswell Hill. His developments typically had wide roads and shopping parades.

From Islington Tribune: "While building in Highbury, Edmondson lived in ‘North Holme’ at 12 Aberdeen Terrace (now 52 Aberdeen Road), one of the largest houses in the area, and ran his firm from 8 The Broadway, Highbury Park (now 86 Highbury Park). He worshiped at the Congregational Church in Highbury Quadrant and later became a benefactor of other non-conformist churches. He provided for the sporting and social requirements of the residents of the Sotheby Road area by establishing the Dudley Lawn Tennis Club behind Kelross Road."

From Islington plaques : "The business continued to flourish with James’ eldest son, Albert James, joining the company in the 1920s. Albert James successfully ran the business, and then became a Conservative MP for Banbury and eventually ennobled as a Baron Sandford in 1945. James Edmondson retired and moved to Bournemouth in 1923, and died there in 1931."

2016: Chris Baverstock kindly sent this terrific photo of his great-great-uncle James, taken at his home, Westberry in Bournemouth on 20 June 1911.

This section lists the memorials where the subject on this page is commemorated:
James Edmondson

Property investors and developers active in 2014.

From Friends of Vauxhall Park: "In 1725 Edward Lovibond of St James, Clerkenw...