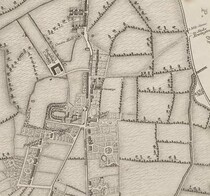 These markers are similar in function to Elger's boundary marker, but with no names or dates to assist.

The local manor house, Highbury House, used to be on the site of Eton House, Leigh Road, to the south-west of the markers that we have found. so we think these markers were on the boundary of those grounds. This 1818 map shows Highbury House but no boundary to the grounds. This 1831 map (extract shown here) shows various boundaries, too many, to be helpful.

Wikipedia gives "The grounds around Highbury House started to be sold off in 1794. By 1894 Highbury House and its remaining grounds became a school. Finally in 1938 Highbury House was demolished and is now the site of Eton House flats (on Leigh Road), built by the Old Etonian Housing Association in 1939."

British History Online describes how the estate was sold off over time. So the boundary was changing over that period and that was possibly why there was a need to mark the boundary. Did they move the markers as the boundary changed? Or was the boundary marking a one-off event?

This section lists the memorials where the subject on this page is commemorated:
Lion rampant 'H' boundary markers

That shape at the top of the stone (filled in with cement, we think) would ha...

Our map of 1837 shows a street called Pelham Street. Possibly this became Pel...

Wikipedia says the works were done in 1850 but the church's own website confi...

The house in which Moore wrote the poem Lalla Rookh was named for it, possibl...

The Sanctuary Housing Association manages homes across England and Scotland, ...