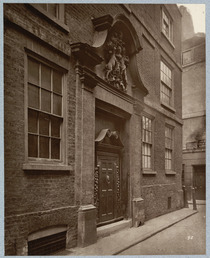 Seven years after they received their first charter from Henry VIII in 1514, the Innholders are recorded as occupying a hall on the present site, beneath which lie the foundations of a Roman quay.  The Hall was destroyed in the Great Fire, rebuilt 1668-74, damaged in WW1, severely damaged in WW2 on 10th May 1941 and fully restored in 1950.

The picture shows the hall in the 1880s, the entrance on College Street which looks the same today.

This section lists the memorials where the subject on this page is commemorated:
Innholders' Hall

In 1476 the Tallow Chandlers bought what was probably a merchant’s house on D...

Their Hall, next to All Hallows Staining, was destroyed in the Great Fire.