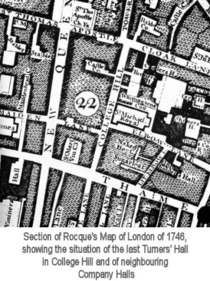 The Guild of Turners began sometime between 1295 and 1310. King James I granted the first Royal Charter in 1604.

In the 15th and 16th centuries almost all the turners in London lived in one very small area and so that was the location for their first hall in 1591, a leased ‘substantial mansion’ in Philpot Lane. Unusually this did not burn down but the Turners had difficulties with their landlord when he became bankrupt. In 1736 they moved to their second hall, a merchant's house in College Hill. This was never as successful as the first hall had been and by 1766 it was sold.  The turners went in to a period of decline but revived in 1845.  However they still have no hall of their own and make use of that of the Apothecaries.

It seems odd that there is a plaque for the hall they were in for only 30 years but not for the one they occupied for over 130 years. Maybe its location is less certain.

This section lists the memorials where the subject on this page is commemorated:
Turners' Hall, second

Tallow chandlers make candles and other products from animal fat.  the Compan...

The History and Antiquities of Dissenting Churches and Meeting ..., Volume 3,...