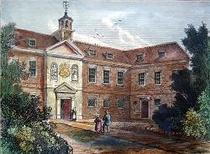 From the school's website:
"In 1666, after the Great Fire of London, many inhabitants of the Old City of London moved to the medieval town of Westminster. With its congested and squalid alleys, the area was the home of many criminals who, until 1623, had the right of sanctuary in the Abbey. It was in the first seedy area – home to every type of vice and depravation - that The Grey Coat Hospital was founded.

On St Andrew’s Day in 1698, eight parishioners of the parish of St Margaret’s each invested 12/6 (65p) towards the founding of the school. The aim of the founders was to give an education to the poor of the parish so that they could be ‘loyal citizens, useful workers and solid Christians’. In 1701 the Governors purchased the old workhouse in Tutle fields (Tothill Fields) from Westminster Abbey and established a school for both girls and boys. St Andrew’s stands on the original site of the Elizabethan workhouse, the flagstones of which are walked over daily. After a colourful history which included a murder in 1773 and a rebellion in protest against the dreadful conditions of the school in 1801, the school became a day school of girls in 1874."

In 1706 Queen Anne granted the Grey Coat Hospital Foundation a royal charter. The original building is still used by the Lower School. The print by William Henry Prior is dated 1878 or later.

This section lists the memorials where the subject on this page is commemorated:
Grey Coat Hospital / Grey Coat School

About the building, from Shoreditch College: "The first building on {this sit...