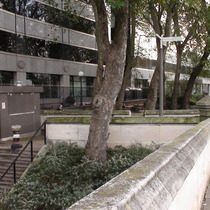 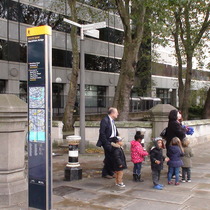 {On a modern information board:}
The Rennie Garden takes its name from engineer John Rennie (1761 - 1821), who built the original Waterloo Bridge and designed both the original Southwark Bridge and the former London Bridge, now in Arizona, all of which were begun between 1811 and 1825. In 1786 a corn mill was built on this site by Rennie, from which the world-famous panorama 'London from the Roof of Albion Mills', the first of its kind, was painted. John Rennie died at his home in Stamford Street in 1821 and in 1862 the Corporation of London secured the preservation of this garden, through an Act of Parliament, for the use of the public for ever.

The 3.25 metre panorama to which the text refers can be seen at the Government Art Collection. There is a zoom feature so you can look in really close. The street off to the left is/was Albion Street/Surrey Street (now Blackfriars Road) with Christchurch over at the left. It’s a very strange painting. I’m sure someone with the right skills could now process it and create a realistic-feeling 360 degree video. 2019: Sadly the link to the Gov Art Collection is now dead. All we can offer as an alternative is this Widipedia image.)

The panorama was created in 1790-3 by father and son artists Robert and Henry Aston Barker. The Mill burnt down in 1791 so they got their on-site work done just in time. London My London has a good post about the building near Leicester Square where this, and other, panoramas were displayed.

The info board has some interesting text but is not worth photographing itself so we've used both photo slots to attempt to show this rather strange garden, subdivided with low walls between massive piers.

2020: The building to the east and south of this garden (probably only erected c.1990s) has been demolished and will be replaced with flats together with a redesign of this garden, which seems to entail the loss of at least one mature tree. There also seems to be a lot more hard-standing and less space for plants. Plans. Thanks to Ian Visits for the pointer.

This section lists the subjects commemorated on the memorial on this page:
Rennie Garden

This section lists the subjects who helped to create/erect the memorial on this page:
Rennie Garden