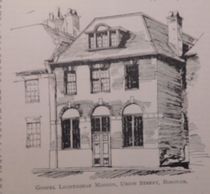 Our drawing, from Exploring Southwark,shows the building to the right of the Mission before the Club building arrived.This website also gives the history of the construction of the two buildings, as follows:

The Gospel Lighthouse Mission started in what is now Ayres Street, nearby in the area known as The Mint, in 1888. It moved around the corner to a hall in Clenham Street but this was in poor condition so The Ragged School Union and Shaftesbury Society (See Lord Shaftesbury for more on The Shaftesbury Society) provided a new building in Union Street, this one. This was opened in March 1907 by the Marquis of Northampton.

Meanwhile the Work Girls Protection Society was founded in 1875 and began with premises in New Kent Road. It was renamed the St Mary’s Girls' Club. In 1899 the Club lost the New Kent Road site so they acquired a lease at 85 Union Street, a former tin plate works.They then raised funds, bought the site to the left of the Mission site, and constructed a building there. 1930 the Girl's Club merged with the Acland Club to form the co-ed St Mary's and Acland Club. 1936 this moved of of Union Street to Nelson Square.

This drawing shows that originally the Mission had no attic parapet, nor cornice. The greyish bricks around the whole building at ground floor level are also, surely, a change to the original design, installed when the buildings were united. But we cannot discover when these changes happened, nor under what circumstances. Perhaps the Mission took over the Club building when the Club moved out.

This section lists the memorials where the subject on this page is commemorated:
Gospel Lighthouse Mission

To the glory of God this stone was laid by the Right Honourable Lord Mayor of...

The church on the Mile End Road was opened in 1903, the school, shown in this...

Queen Elizabeth I granted the charter in 1573.  Set up in the Barnet Tudor Ha...

Founded by shipbuilder George Green as an infants' school, at the corner of C...