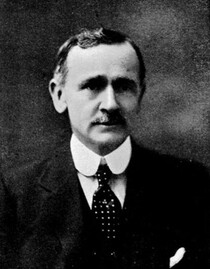 George Fearnley Carter was the Borough Engineer for Croydon.  Grace's Guide has some information, and it looks like he came from Yorkshire and worked for Croydon Council from at least 1899 till at least 1934.

Our colleague, Andrew Behan, has researched the man and found that he was born on 8 March 1869 in Heckmondwike, Yorkshire, the eldest of the three children of Joseph Fearnley Carter (1838-1919) and Jane Carter née Longbottom (1844-1897). His birth was registered in the 2nd quarter of 1869 in the Dewsbury registration district, Yorkshire.

The 1871 census shows him living at the Brunswick Hotel, 33 Vicar Lane, Leeds, Yorkshire, with his parents and his brother Frank Clarence Carter (1870-1904). Also residing there were three servants, i.e. a male brewer & ostler, a female general domestic servant and a nurse. His father's occupation was recorded as a licenced victualler.

When the 1881 census was compiled he was described as a scholar residing at the Red House Inn, 80 Meadow Lane, Leeds, Yorkshire, with his parents, his brother and his sister Adelaide Carter (1872-1942), together with two servants, i.e. a male waiter and a female domestic servant. His father continued to be shown as a licenced victualler.

After completing his education at Yorkshire College, Victoria (now Leeds) University, he served a three-year apprenticeship under Thomas Hewson, M.I.C.E., from 1883-1886. On completion of his training he was appointed as Assistant and passed through the different branches of the City Engineer's Department, Leeds, until finally appointed Principal Assistant.

In the 1891 census he is described as a civil engineer and was shown as living at 92 Meadow Lane, Leeds, with his parents and both siblings, together with two male servants, i.e. a brewer & a waiter. His father was again described as a licenced victualler and his brother as a leather currier.  He worked mainly on drainage systems and in 1895 was given sole charge of preparing parliamentary plans for the demolition and reconstruction of an insanitary area. He prepared evidence for the City Engineer and attended both Houses of Parliament where the Bill was successfully passed..

On 21 April 1898 he married Sarah Eleanor Atkinson (1873-1951) at St Peter's Church, Dewsbury Road, Hunslet Moor, Leeds, where the marriage register shows him a civil engineer residing in Beeston Hill, Leeds, whilst his wife was shown as a daughter of licenced victualler living at the New Inn, Dewsbury.

In 1899 he was appointed Deputy Borough Engineer, Croydon, Surrey and in the 1901 census he is shown as a civil engineer living at 81 Waddon Road, Croydon, with his wife, their two sons, William Fearnley Carter (1899-1964) and George Leslie Carter (b.1900), together with a nurse and house-maid. In 1903 he was promoted to Borough Engineer and Surveyor and Waterworks Engineer, a position he held until his retirement in 1934.

When he completed his 1911 census return he described himself as the Borough Engineer & Surveyor for Croydon Borough Council, living in a ten roomed house at 1 Beech House Road, Croydon with his wife and their three children, William, George and Esme Carter (1907-1922), together with a cook and a housemaid. The census shows that his wife had given birth to four children but that only three had survived.

When his eldest son enlisted in Honourable Artillery Company in 1917 the family address was given as Woodside Grange, Croydon.

In the 1939 England and Wales Register he is described as an M.Inst.C.E., a retired chartered civil engineer living at 44 Sandilands, Croydon, with his wife and two females who were employed on domestic duties.

Telephone directories from 1954 list him at 22 Upfield, Croydon. Probate records confirm that he died, aged 92 years, on 12 January 1962 at The General Hospital, Croydon and confirm that he had been living at 22 Upfield, Croydon. Probate was granted on 16 April 1962 to his son William Fearnley Carter who was described as a solicitor and to David Alexander Cowie who was a chartered accountant. His effects totalled £34,124-9s-9d.

We found the image in this book, Croydon and the Great War: The Official History of the War Work of the Borough and its Citizens from 1914 to 1919. Our experience with Google Books is that actually getting to see the page you want and not  "no preview available for this page" is more of a black art that a science.

This section lists the memorials where the subject on this page is commemorated:
George Fearnley Carter

From Colonial Spectacles “John (or Jan) F. Groll was an architect and enginee...

Mining engineer and co-founder of Rotary International. Born in Carlinville, ...