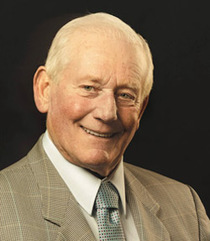 Businessman and pioneer of guitar amplification. Born in London. An electrical engineer he built a portable amplification system, which he used in his evening job as a singer and drummer.  On 7 July 1960 he opened a music store with his wife Violet and son Terry called ‘Jim Marshall and Son’ at 76 Uxbridge Road in Hanwell. This developed into the Marshall Amplification Company.

In March 1963 a second shop was opened almost opposite, at 93 Uxbridge Road. In June 1964 a  dedicated factory was opened on Silverdale Road in Hayes.

Jimi Hendrix, Eric Clapton, and other blues rock-based bands from the late 1960s such as Free, used Marshall stacks both in the studio and live on stage making them among the most sought after and most popular amplifiers in the industry and giving Marshall the nickname of the 'Father (or Lord) of Loud'.

Our source for this information is mainly Marshall, where there is a much fuller account of how the business grew and its widespread influence.

This section lists the memorials where the subject on this page is commemorated:
Jim Marshall

Construction company with origins in the Netherlands.

Established as the Thames Bank Ironworks by Thomas Joseph Ditchburn and Charl...

From Historic England: Engineer and architect to the Chiswick Urban District ...