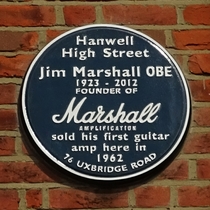 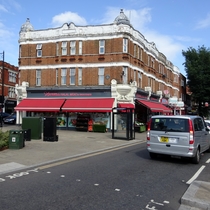 The plaque was unveiled by Brian Poole (of Brian Poole and the Tremeloes). Poole wrote "This is where Jim’s first shop was and on the day I went and stood outside what used to be No. 76 Uxbridge Road for the first time since the Tremeloes and me were among his very first customers in the early 60’s."

The location of the plaque is puzzling. The plaque says that Marshall sold his first guitar amp. 'here' at number 76, but the plaque is (2019) on number 147 Uxbridge Road, and we can find no justification for this location.

With assistance from Stephen Brasher and Andrew Behan we discovered the pavement plaque at number 76, which is the location of the first Marshall shop, opened in 1960.  A second shop was opened in 1963, almost opposite the first, at number 93. (And a dedicated factory was set up at Silverdale Road, Hayes).

The buildings at 76 (Tony’s Barbers) and 93 (TaxAssist Accountants) are both easily pre-1950s but Fuzzfaced has a photo of a c.1950/60s “Marshall” shop captioned “The first Jim Marshall’s store, at Uxbridge Road 76 (Photo courtesy of Marshall)”. This certainly does not show 76 Uxbridge Road and really confused us initially, but we now wonder if it is a different Marshall shop, at a totally different location, not connected with Jim Marshall at all.

Stephen Brasher found a report in a 1966 Middlesex County Times saying that Marshalls now have a factory and two shops, one of which "is to be demolished along with a row of others in Uxbridge Road". The row of shops 79-103 are substantial properties so we think it was 64 – 82 that was slated for demolition.  These shops are small and are indeed the type of properties that, in the 60s, were considered of little worth. But the plan did not go ahead and the shops have provided many small businesses with premises for almost 60 years.

One day someone will explain why this plaque is on number 147, while, at number 76, there is a perfectly good section of wall, ready and waiting.

This section lists the subjects commemorated on the memorial on this page:
Jim Marshall - wrong location

A company that specialises in the design and manufacture of  music amplifiers...

Businessman and pioneer of guitar amplification. Born in London. An electrica...

This section lists the subjects who helped to create/erect the memorial on this page:
Jim Marshall - wrong location

Singer. Born in Dagenham. He became lead singer with the Tremeloes (originall...

Apart from the actual names the two plaques are the same. Our photo shows th...

The ICC is the sport's governing body, the International Cricket Club.