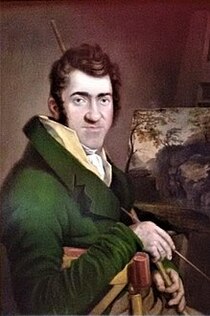 Water colour painter. Born Orchard Street, in December 1767, the third son of George Barret (1732-1784) and Frances Barret née Percy, about four years after his father's arrival from Dublin. Two brothers and a sister also became artists. Travelled little, most of his landscapes being of the Thames valley and the home counties. Lived with his own family and his sister in Paddington, first at 29 Lisson Grove, and then at 17 and 162 Devonshire Place where he died, aged 74 years, on 19 March 1842, from inflammation of the lungs. He was buried on 26 March 1842 in St Mary's Churchyard, Paddington Green.

This section lists the memorials where the subject on this page is commemorated:
George Barret Jr

Artist. Born Bruges, Belgium where his father was working as an architect/art...

Painter. Born Budapest.  In 1907 moved to London and stayed, though he often ...