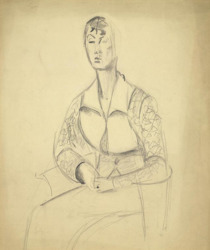 Fashion designer and dress historian, who brought the history of fashion to bear on art history and the dating of paintings. She designed for the theatre and for fashion, having her own shop in the 1930s.

1934 married Eric Newton. During the war they lectured on art history and design for Cambridge University's extramural department. She also worked as an adviser to the National Gallery and founded a postgraduate course in the History of Dress at the Courtauld Institute of Art. Published a number of books on her subject. See Eric's page for more information about the marriage.

Stella Mary Pearce was born on 17 April 1901, the only child of Henry James Pearce (1867-1935) and Georgiana Wilkie Maria Pearce née Hoby (1870-1963). Her birth was registered in the Lambeth registration district and her father was a company secretary according to the entry on his marriage certificate.

In the 1911 census she is shown as school-child visiting with her mother the home of James Louis Garvin, a journalist/editor, and his family at 9 Greville Place, Maida Vale. In the 1933 electoral registers she is shown with a business premises and occupation qualification at 115a Park Street, London, W1, enabling her to vote there in local elections only, although her abode for general elections was listed at 67 Great Russell Street, London WC1. In the 1934 Post Office Directory she is listed as a costumier at 67 Great Russell Street, London WC1.

She married Eric Newton (1893-1965) and their marriage was registered in the 1st quarter of 1934 in the Holborn registration district, her Wikipedia entry incorrectly stating it was in 1936. Electoral registers from 1935 to 1937 continued to show her at 115a Park Street, London, W1 but her abode was now 5 Berkeley Mews, London, W1.

The 1939 England and Wales Register shows her as a dress designer and managing director - dressmaking firm, living with her husband at 20 Wilmington Square, Finsbury. Telephone directories from 1948 show her husband listed at 3 Cumberland Gardens, London, WC1 until his death in 1965 from when, until at least 1983, she was listed as the telephone subscriber at this address.

In the 1976 Queen's Birthday Honours List she was made an Officer of the Most Excellent Order of the British Empire (OBE) for services to the history of dress in art.

The 1949 drawing is by Percy Wyndham Lewis.

This section lists the memorials where the subject on this page is commemorated:
Stella Newton