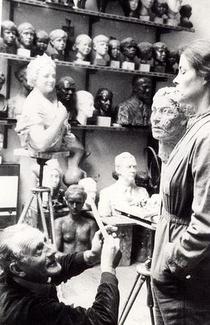 Born Czechoslovakia as Frantisek Belsky. Fled twice, to escape the Nazis and then the Communists. Ornamental Passions we learn that all Belsky's sculptures contain an empty Guinness bottle, the day's newspaper, a sixpence and a note stating that he was the artist.

Other works in London: the 1957 Shell fountain in front of the Shell Building on the South Bank and The Lesson in Bethnal Green.

From Radio Prague International: "He served in the Battle of France, was twice mentioned in the dispatches during the war and saw Winston Churchill at an inspection after the evacuation at Dunkirk. .. After the war, Bělský returned to Czechoslovakia and studied sculpting. However, his studies were disrupted when Bělský escaped Czechoslovakia a second time after the Communist coup d’etat in 1948, but he soon found himself learning again, this time at the Royal College of Art in London. The artist’s first major commission came at the Festival of Britain in 1951. ... Bělský became the official sculptor of the royal family, creating the busts of Queen Elizabeth II, as well as of the princes Philip, William, Andrew and the queen mother."

This section lists the memorials created by the subject on this page:
Franta Belsky