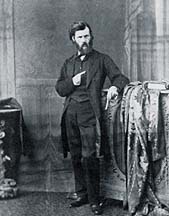 Sculptor. Born in Partick, Glasgow, Lanarkshire. He moved to London to study ...

Born Australia.  Served in WW2 initially as a sapper and then as a war artist.