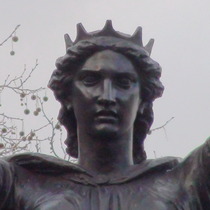 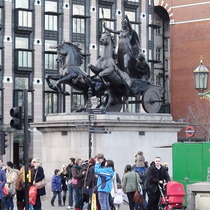 {On the front of the plinth:}
Boadicea, Boudicca, Queen of the Iceni who died AD 61 after leading her people against the Roman invader.

{On the right, river side:}
Regions Caesar never knew, thy posterity shall sway. {A quote from William Cowper's 1782 poem "Boadicea, an ode".}

{On the left, road side:}
This statue by Thomas Thornycroft was presented to London by his son Sir John Isaac Thornycroft CE and placed here by the London County Council, AD 1902.

The horses look totally out of control to us; no wonder the two daughters look so worried.

At one stage this statue was intended to be placed on Parliament Hill. Here was a tumulus, supposedly Boudicca's burial place and when, in 1894 the LCC decided to excavate it, a Thornycroft proposed this statue for the site. However the findings caused the Society of Antiquaries to consider the legend disproved and the statue was placed here in Westminster instead.

This section lists the subjects commemorated on the memorial on this page:
Boadicea/Boudicca/Boudica

This section lists the subjects who helped to create/erect the memorial on this page:
Boadicea/Boudicca/Boudica

Cuneo{Brass plaque on the front of the plinth, to the right:}This sculpture w...