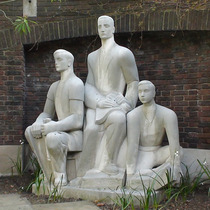 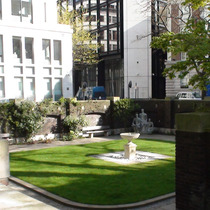 {On a plaque near the statue:}
Three Printers c 1957 by Wilfred Dudeney (1911 - 1989)
Formerly at New Street Square, Holborn, this Portland stone statue, commissioned by the Westminster Press Group, represents aspects of newspaper-making: a newsboy, a printer and an editor. It is Britain's only public monument to newspapers. It was removed in 2009 by the Goldsmiths' Company, freeholders of New Street Square, and placed in the Company's garden, following the redevelopment of the square.

{The sculptor has found an integral method of signing his work. The printer (the figure on the left) is holding a "stick" which contains the metal type spelling out his surname, in mirror writing, of course.}

This section lists the subjects commemorated on the memorial on this page:
Three Printers statue

This section lists the subjects who helped to create/erect the memorial on this page:
Three Printers statue

Ornamental Passions reports on another of his works nearby at Pemberton House...

We are not convinced by the derivation of Horselydown. Horses don't lie down ...