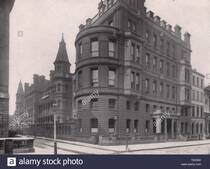 Founded as The Hospital for Sick Children, the first hospital in England to provide in-patient beds specifically for children. Its first premises were at 49 Great Ormond Street a converted 17th century townhouse on the east corner with Powis Place. The principle founder was Dr Charles West.

In 1858 it raised enough money to be able to expand next door, into 48 Great Ormond Street.

1869 the Hospital opened a convalescent home at Cromwell House, the 17th century mansion on (then still rural) Highgate Hill, which was retained until 1924.

A new purpose-built hospital was constructed 1871-5 designed by Edward Barry, on the land which had been the gardens of the two houses and it became known as “The Hospital in the Garden”. The foundation stone was laid on 11 July 1872 by Princess Alexandra accompanied by the Prince of Wales. The hospital occupied the whole of the eastern side of Powis Place and contained the Gothic chapel, endowed by the architect’s brother William Henry Barry in memory of his wife Caroline. 1878 a new Isolation Block, was opened to the north.

1893 the two original houses on Great Ormond Street were demolished and replaced by a building with 3 large wards, designed by Charles Barry Jnr, Edward's brother. This is the surviving redbrick structure with “The Hospital for Sick Children“ in a first floor frieze and “Paul O’Gorman Building” on the porch frieze.

The 1875 building was demolished in 1990 and replaced with the Variety Club Building. The chapel was preserved and moved (a short distance) on its concrete foundation by hydraulic skates to its present location.

1908 a new free-standing Out-Patients building (designed by, you guessed it, Charles Edward Barry, 1855–1937, son of the one who built the 1893 building) was opened on Great Ormond Street immediately to the east on land shown as the Working Men’s College and the Hospital and Convent of St. John & St. Elizabeth on this 1895 map. The nuns' residential building on Guilford Street was taken over by the hospital as a nurses’ home and this was replaced in 1933 with the Princess Royal Nurses Home.

This history comes from HHARP, which gives much more detail and has many historical photos. Sadly it stops at this point in time. We can add that GOSH became part of the NHS in 1948 and continues to expand and develop the site.

Our photograph shows the turreted 1875 building down the narrow Powis Close. Drawings of it square-on (e.g. Victorian Web) are just pretending that the other side of Powis Close didn't exist. The source, Alamy, dates the photograph to 1896 and, the right, it shows the Hospital and Convent of St. John & St. Elizabeth still standing.

This section lists the memorials where the subject on this page is commemorated:
Great Ormond Street Hospital for Children

This section lists the memorials created by the subject on this page:
Great Ormond Street Hospital for Children